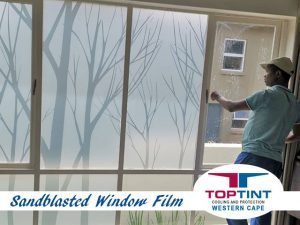 Sandblasted window film has a similar appearance to sandblasted glass. This option is much easier to maintain and far less expensive! It blocks out ultraviolet and reduces glare while enhancing privacy.

Add style with an unlimited range of decorative options, create the look you desire at home or at your business.
Contact the window tinting experts at TopTint in George for all your window tinting needs!