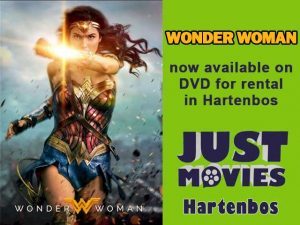 Wonder Woman is one of the latest DVD releases available for renting at Just Movies Hartenbos. The film received numerous positive reviews from critics since it was first screened on the big screen earlier in 2017. The film is an American superhero film staring Gal Gadot, Chris Pine, Robin Wright, Danny Huston, David Thewlis, Connie Nielsen and Elena Anaya.

The film tells the story of Princess Diana, who grew up on the Amazon Island of Themyscira. After American pilot Steve  Trevor crashes offshore of the island and is rescued by her, he tells the Amazons about the ongoing World War. Diana leaves her home in order to end the conflict, and be comes Wonder Woman in the process.

An awesome DVD to watch for sure! Get your copy for rental from Just Movies in Hartenbos.