Shuttle to the Fancourt Amateur Open in George 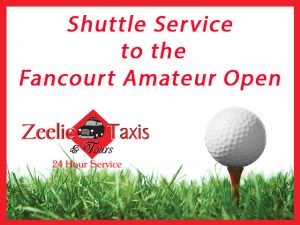 Shuttle Service to the Fancourt Amateur Open in George

Zeelie Taxis offers shuttle services to get you from George Airport and George bus stops to the annual Fancourt Amateur Open. This will be 21st consecutive year that the open will be held and takes place from 15 to 20 May 2016. Zeelie Taxis will have 4 to 13 seater vehicles running between George Airport and Fancourt.

Whether you are only one person or a bus full of people, we will be able to help with shuttles from George Airport to Fancourt, George or to any other place in the Garden Route. Our fleet consists of normal taxis seating one to four persons, as well as busses seating 7 and 13 persons. Quotes on larger groups must be negotiated.